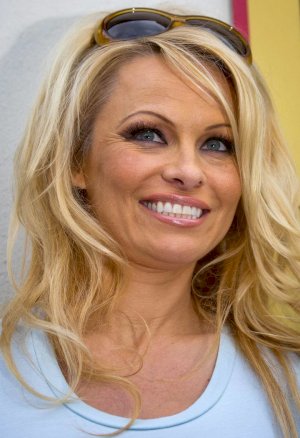 Pamela Denise Anderson (born July 1, 1967) is a Canadian-American actress, model and animal rights activist. Anderson is best known for her appearances in Playboy magazine and for her work on the television series Home Improvement, Baywatch, and V.I.P.. She initially rose to fame after being selected as the February 1990 Playmate of the Month for Playboy magazine. Anderson went on to frequent appearances on the magazine's cover, holding the record of most Playboy covers by any person.She became known to a wider audience in 1991, appearing as a recurring character, Lisa, on the award-winning ABC comedy series Home Improvement for its first two seasons. She received international recognition for her starring role as C. J. Parker in the action-drama television show Baywatch, further cementing her status as a sex symbol.Anderson has appeared in films such as Raw Justice (1994), Barb Wire (1996), and Blonde and Blonder (2008). She was inducted into Canada's Walk of Fame in 2006.Anderson is a prominent activist for the animal rights movement and has conducted campaigns condemning the commercial fur industry and promoting veganism through the animal rights organization People for the Ethical Treatment of Animals (PETA).