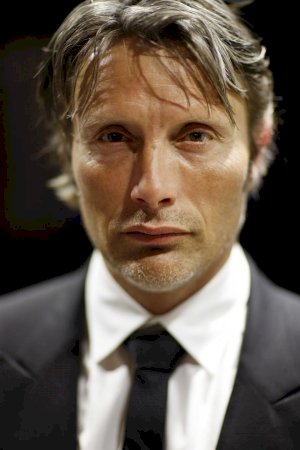 Mads Dittmann Mikkelsen, (Danish: [mas ˈmiɡl̩sn̩] ( listen); born 22 November 1965) is a Danish actor. Originally a gymnast and dancer, he began acting in 1996. He rose to fame in Denmark as Tonny the drug dealer in the first two films of the Pusher film trilogy, and in his role as the brash yet sensitive policeman, Allan Fischer, in Peter Thorsboe's Danish television series Rejseholdet (Unit One) (2000–03). Mikkelsen became more widely known for his role as Tristan in Jerry Bruckheimer's production King Arthur (2004), but achieved worldwide recognition for playing the main antagonist Le Chiffre in the twenty-first James Bond film, Casino Royale (2006). He has since become known for his roles as Igor Stravinsky in Jan Kounen's French film Coco Chanel & Igor Stravinsky (2008) and his Cannes Film Festival Best Actor Award-winning role as Lucas in the 2012 Danish film The Hunt. In 2012, he was voted the Danish American Society's Person of the Year. He starred in the television series Hannibal (2013–15) as Dr. Hannibal Lecter. In 2016, Mikkelsen portrayed Kaecilius in Marvel's film Doctor Strange and Galen Erso in Lucasfilm's Rogue One: A Star Wars Story. In 2018, he starred in Joe Penna's survival drama Arctic. Mikkelsen is set to star in Doug Liman's Chaos Walking and Jonas Åkerlund's Polar. A. O. Scott of The New York Times remarked that in the Hollywood scene, Mikkelsen has "become a reliable character actor with an intriguing mug" but stated that on the domestic front "he is something else: a star, an axiom, a face of the resurgent Danish cinema".