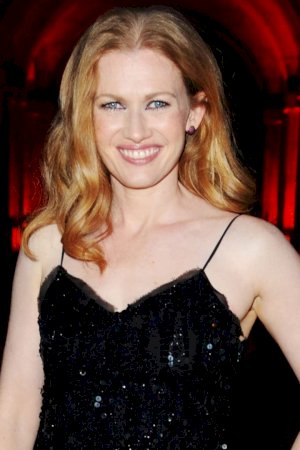 Marie Mireille Enos (; born September 22, 1975) is an American actress. Drawn to acting from a young age, she graduated in performing arts from Brigham Young University, where she was awarded the Irene Ryan Acting Scholarship. Having made her acting debut in the 1994 television film Without Consent, she has since received nominations for a Tony Award, a Golden Globe Award, and an Emmy Award. Early in her career, Enos appeared variously as a guest star on such television shows as Sex and the City and The Education of Max Bickford among others. She made her feature film debut with a minor part in the 2001 romantic comedy Someone Like You, but garnered wider attention for her role as Honey in the 2005 Broadway production of Who's Afraid of Virginia Woolf?. Her performance in the latter earned her a nomination for Best Actress at the Tony Awards. She again ventured into television roles and landed the role of twins Kathy and JoDean Marquart in the HBO drama series Big Love. Enos' breakout role was on the AMC crime drama series The Killing; she played Sarah Linden, a Seattle-based police officer for the show's four seasons from 2011 to 2014. Her performance garnered her critical acclaim and earned her nominations for Outstanding Lead Actress in a Drama Series at the Primetime Emmy Award and the Golden Globe Award. Enos starred as Karin Lane in the 2013 disaster film World War Z and Kathleen Hall in the 2014 romantic drama If I Stay; both of the films were blockbuster productions. She continued to draw praise for her work in independent films like Never Here (2017). Enos starred as the lead character in the short-lived ABC legal thriller The Catch.